Travel back in time with a visit to the ancient Rose City of the desert. Ride through a narrow gorge on horseback to discover Petra, a millennia-old metropolis carved into the rock. 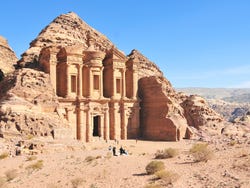 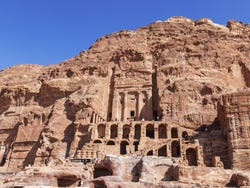 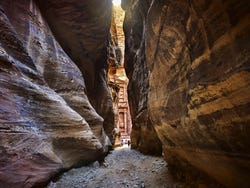 On the morning of your tour, you'll be picked up from your hotel in Amman ready for your adventure into the desert in the south of Jordan. After a journey of around four hours, you'll reach Petra. This ancient rock-cut city, originally known as Raqmu, was a thriving trading hub and the capital of the Nabataen Kingdom dating back as early as the 5th century BC.

Immerse yourself in the incredible desert scenery on horseback. You'll feel just like Indiana Jones in "The Last Crusade"! Riding through the narrow gorges that snake between towering rock faces, you'll reach the iconic Treasury or Al Khazneh, the best-known structure in the Petra archaeological complex, an elaborate temple that is believed to have been a royal mausoleum.

After marvelling at its breathtaking interior, you'll walk through the city to the royal tombs, while your guide reveals the history of the Napataen people and the importance of Petra under the Roman Empire.

Take a well-earned break enjoying lunch at one of the local restaurants (not included). At the end of your visit, you'll make the return journey to your hotel in Amman.

The tour was good, we enjoyed it. Our guide (Ramsi) was very nice, and explained many things to us along the way. Unfortunately, the official guide tour provided inside Petra was not good at all.

I travelled with teenagers
8

7.50 / 10 15 reviews
Discover the magic of Jordan on this four-day tour of its natural and historical treasures: explore Petra, the Dead Sea and the Wadi Rum desert.
US$ 575
Book
like

9 / 10 2 reviews
Discover the incredible mosaics of Madaba and enjoy the panoramic views of the Holy Land from Mount Nebo with this trip to Jordan's biblical past.
US$ 300 per group
Book
like

9.50 / 10 17 reviews
Get to know Jerash, the so-called "Pompeii of the East", enjoy a panoramic tour of Amman and visit the Medieval Ajloun Castle on this day trip.
US$ 335 per group
Book