Enjoy the best views of Atlanta on this guided tour. You'll tour the entire city from the comfort of a bus that will take you to see landmarks such as Piedmont Park and Martin Luther King Jr's childhood home. 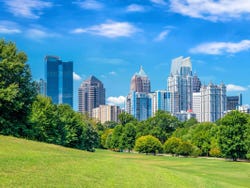 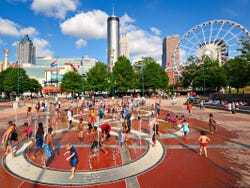 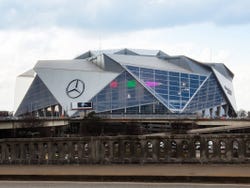 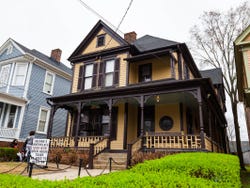 We'll pick you up from your hotel at the arranged time and climb on board a bus that will take us around the most emblematic places in Atlanta. During the 3 hour tour, we'll travel through Atlanta accompanied by a guide telling us interesting facts about each of the sights we see.

We'll begin the tour on Peachtree Street, Atlanta's main avenue as well as one of the oldest. We'll then continue in the historic district of Fairlie-Polar, the commercial and historic heart of the city with several 19th-century style buildings, such as the Atlanta Flatiron. What differences can you spot between the architectural styles in Atlanta and New York?

Heading downtown, we'll visit the Mercedes Benz Stadium and the Centennial Olympic Park, passing some more of the city's main attractions such as Coca-Cola World, Georgia Aquarium and the CNN headquarters.

We'll then head midtown to a part of Atlanta where Margaret Mitchel's house (author of Gone with the Wind), Fox Theater, Georgian Terrace, Ansley Park and Piedmont Park, as well as Atlanta's Central Park, are all located.

We'll also visit Tuxedo Park, where the governor of Georgia's mansion is located, as well as Swan House, built in the 1920s and famous for having been used in several films, including 'The Hunger Games'.

Afterwards, we'll drive through Old Fourth Ward as we take in the mark left by the leader of the famous human rights movement, Martin Luther King Jr. His birthplace, church and tomb are all located in this district. On the subject of social politics, we'll also see The Jimmy Carter Presidential Library and Museum.

We'll end our guided tour of Atlanta with a drive through the East Side, passing Cabbagetown, Inman Park and Grant Park, full of Victorian houses- the perfect way to end this incredible tour!

At the end of the tour, we'll take you back to your hotels in Atlanta.

This tour includes pickup from hotels in Atlanta. If you are not staying in the city, however, we'll meet you in the parking lot of the MLK Library.

The minimum required reservation for this activity is two people. The tours are private, offering you a much more personalized service.

Tours or activities will not consist of more than 6 people per group.

Tickets to monuments and museums.

10 / 10 22 reviews
Travel to the world of Stranger Things, touring the filming locations in Atlanta. Discover where Eleven, Mike, Dustin, Luke and Will lived their adventures.
US$ 132.50
Book
like

No rating yet
With this tour around Atlanta, you'll get to see the film locations of The Walking Dead, one of the most successful series in recent years.
US$ 150
Book
like

No rating yet
Travel to North Georgia and discover the region's great winemaking tradition, visiting three wineries, there vineyards, and Helen.
US$ 99.99
Book