Delve into the legendary history of Cyprus on this day trip from Ayia Napa: explore the archaeological ruins of the Ancient Greek city of Salamis and discover the famous coastal resort of Famagusta. 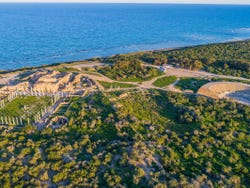 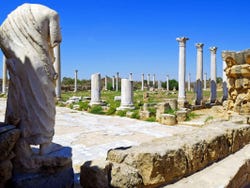 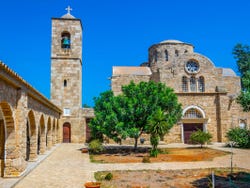 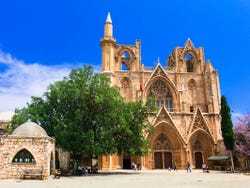 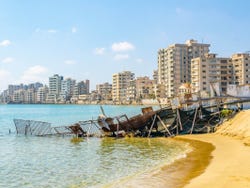 After being picked up from your hotel in Ayia Napa between 8:30 am and 8:55 am, you'll set off on your day trip to some of Cyprus' most interesting monuments. An hour later, you'll arrive at your first stop: the Orthodox Monastery of Saint Barnabas. Do you know the history of this martyred religious figure? Entering the sanctuary, you'll visit the crypt where his much-venerated tomb is located.

Just ten minutes away from the monastery, you'll reach one of the best conserved archaeological sites in Cyprus: the ruins of the Ancient Greek and Roman city of Salamis. Discover the historic theatre, the public baths, the gymnasium and other important buildings which have incredibly resisted the passage of time.

From Salamis, you'll be taken to the nearby coastal city of Famagusta, where you'll visit the Lala Mustafa Pasha Mosque. Yes, it really is a mosque! The Islamic temple is located in a Gothic-style building that resembles a Catholic church more than a mosque... you'll discover why on the day of your tour! You'll then have free time to enjoy lunch in Famagusta (not included). We recommend a mouth-watering dish of fresh fish!

With energy renewed, you'll then head towards Varosha, known as the "ghost town of Cyprus". Abandoned apartment blocks and deserted shops and hotels pay testament to the tragic recent history of the island. Your guide will reveal what happened in 1974 causing the residents of Varosha to leave their homes behind.

At the end of your fascinating excursion, you'll make the return journey to Ayia Napa.

Both the Salamis archaeological site and the city of Famagusta are located in the Turkish Republic of Northern Cyprus. This territory is not in the European Union, therefore you must bring your valid passport on the day of the excursion.

This day trip does not include entrance fees to the Saint Barnabas Monastery or the Salamis archaeolgical site. The total price of both tickets, which you'll pay on the day of the tour, is 5 Euros per person.

It is also possible to reserve this excursion with pick up from hotels in Larnaca and Protaras.

English speaking guide with expert knowledge of the history of Cyprus.

US$ 28.70
Free cancellation up to 48 hours before the service starts
Book

10 / 10 2 reviews
Visit Nicosia at your own pace with this day trip from Ayia Napa. Discover the main cultural and historic attractions in the beautiful capital of Cyprus.
US$ 21.50
Book
like

No rating yet
Learn all about Cyprus' fascinating history on this trip to Paphos and Kourion, one of the main Greco-Roman sites in the south of the island.
US$ 40.70
Book
like

No rating yet
Discover the cultural heritage of Famagusta and Kyrenia when you take this unforgettable trip around the most beautiful parts of Cyprus.
US$ 50.30
Book