Remind yourself of the iconic series with this Game of Thrones Tour from Bilbao. You'll visit the well-known locations such as San Juan de Gaztelugatxe, Zumaia and Muriola Beach. 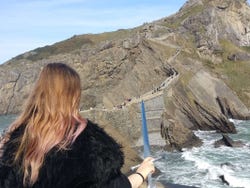 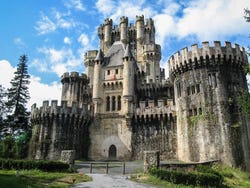 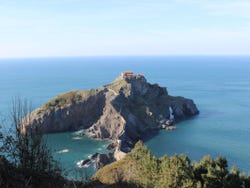 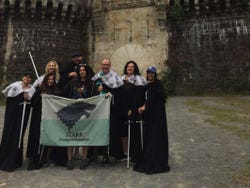 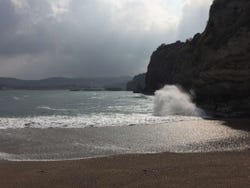 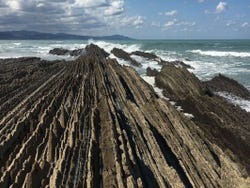 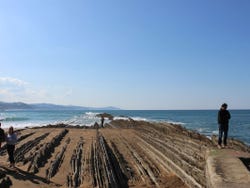 At the time chosen we'll depart from the Paseo del Arenal in Bilbao by bus that will take us to explore the locations for the successful HBO series, Game of Thrones. We'll find out why these locations were chosen and more fun facts.

As we follow in the footsteps of Daenerys, Tyrion, and Jon Snow along the Basque coast, our first stop will be Muriola beach, in Barrika, better known in fiction as the King's Landing beach. Here we'll be reminded of when Davos, Tyrion and Gendry run away from the Golden Company in the seventh season.

Next, we'll visit Butron Castle, an imposing fortress 20 kilometres (12 miles) from Bilbao. Here you can try on cloaks and swords to dress up as the Lords of Winterfell, don't forget to take a photo!

We'll follow the Game of Thrones tour through the symbolic corner of San Juan de Gaztelugatxe. Or should we say Dragonstone? We'll learn about its history and remember the scenes that were recorded here.

After this intense walk, we'll stop in Bermeo where you'll have one hour of free time to have lunch at a local restaurant. We recommend the famous pintxos accompanied by a txakoli.

Following on we'll travel to the last stop of the tour, Itzurun beach in Zumaia. Do you remember the arrival of Daenerys and his dragons? It's no surprise the producers of the series selected this location to shoot one of the most important moments of the series. You'll be enamoured by its landscape!

We'll finish the tour arriving back at the meeting point at approximately 5.30 pm.

When booking, you can choose the half-day tour option. The half-day tour, which lasts approximately 5 hours and 30 minutes, will follow the same itinerary as the full-day tour except for the visits to Bermeo and Itzurun beach in Zumaia.

Due to a landslide issue, currently it's not allowed to go up to the chapel of San Juan de Gaztelugatxe. However, you can see the temple from several viewpoints.

Please note that if you choose the full day tour this option only takes place on Sundays.

If you prefer the half-day tour, this option is only available on Fridays, starting at 10 am and finishing at 3:30 pm.

Full day tour - Sunday at 9 am

Physical: Only some areas are accessible. Accessible toilets. An accompanying person is required. This must be indicated in the reservation. Show more

Auditory: Varies according to the attraction included. Offers technological adaptations for the deaf.

The activity helps the conservation of biodiversity.

If you cancel 3 days before the day of the activity, we will refund you 90%. If you cancel under this time or do not show up, you will not be refunded.

The activity is a shame not to arrive at the Church on the rock but we already knew it before we started. Opinion translated. Show original.

The tour was great, the guides offered very detailed information with photos, scenes and more from the series. Apart from this, it is 100% recommended even for those who have not seen the series but who want to enjoy the landscape, since they gave us other very interesting details and explanations about San Juan de Gaztelugatxe, Zumaia or Bilbao (Zubizuri bridge, bridge La Salve, Deusto ...). We recommend 100% the tour, and if you can, do not hesitate to choose the full day one! Opinion translated. Show original.

The girls who run it (Leire and María) are very nice and provide first-hand information. If you like Game of Thrones, you will like the tour for sure. Pd: Grande Javi Marcos Opinion translated. Show original.

Leire and Maria, the guides, make for a fun and interesting experience. The minibus is comfortable and the journey is enjoyable with videos and music. Highly recommended Opinion translated. Show original.

We have had a great time the best excursion, the very nice girls have explained everything to us great with many anecdotes and the incredible places visited, highly recommended excursion is worth it, thanks María and Leire, you are great !! Opinion translated. Show original.

9.40 / 10 2,189 reviews
Delve deep into the stories and secrets of Bilbao's historic centre on this free tour of the best known areas of the Biscay capital. What's more - it's free!
Free!
Book
like

8.80 / 10 162 reviews
Travel through the northern Spanish region with this Basque Coast Day Trip. Discover its main tourist attractions including Getxo, Butron Castle and Mungia.
US$ 71
Book