Get to know the Brazilian city at the most magical time of the day with this Florianopolis Sunset Bus Tour. You'll take an open-top bus ride past the main attractions. 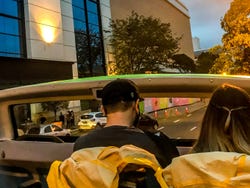 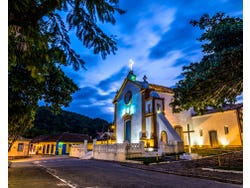 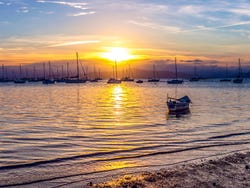 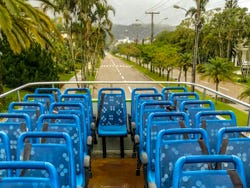 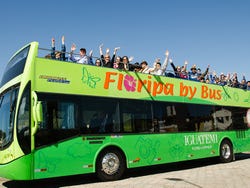 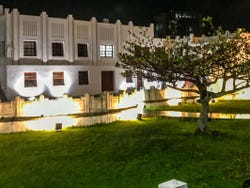 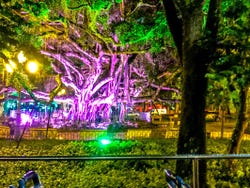 At 6 pm we'll board the open top bus at Avenida das Nações to tour the north and west areas of Floripa. We'll depart from Canasvieiras and pass by the coast of Jurerê Internacional. Did you know that it is known as the Brazilian Miami? Here you'll have an hour to stroll around freely.

The tour will continue through Open Shopping, a popular open-air shopping mall, and stop to enjoy the sunset at the nearest beach. It's a real paradise!

The next point of the tour will be in the most charming neighbourhood of the city: Santo Antônio de Lisboa. We'll also pass near the Carijos Ecological Station, a natural park that protects native species of flora and fauna. In Santo Antônio we'll appreciate its narrow streets of Azorean influence and its shops, and we'll stop for 40 minutes.

Our final stop will be the illuminated church of Nossa Senhora das Necessidades, declared Historical Heritage, before returning to the starting point in Canasvieiras. We'll arrive there at 9:30 pm.

The activity takes place with a guide that speaks in english, spanish and portuguese.

US$ 6.80
Free cancellation up to 24 hours before the service starts
Book

No rating yet
Discover a tropical cocktail of sun, beach, skyscrapers, and cable cars, when you take our fantastic trip to Balneario Camboriu and Unipraias Park.
US$ 69
Book
like

No rating yet
Discover the amazing Brazilian city of Florianopolis when you take our fantastic panoramic bus tour, accompanied by an expert local guide.
US$ 63
Book