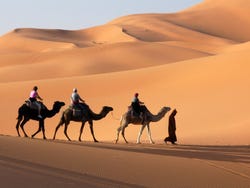 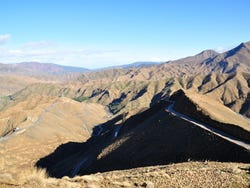 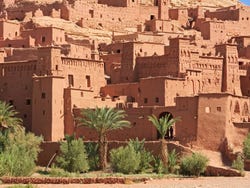 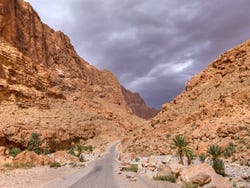 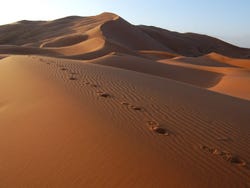 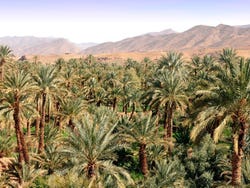 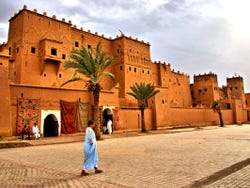 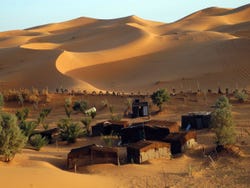 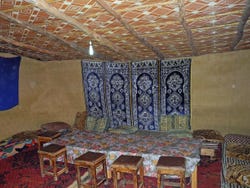 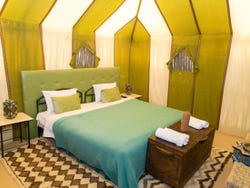 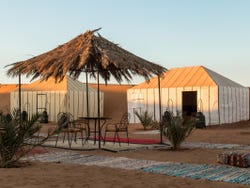 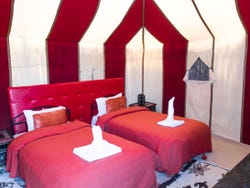 After collecting you from your hotel, riad or from the airport, we'll head to Ouarzazate. On the way we'll pass through the striking Atlas Mountains via the stunning Tizi n'Tichka mountain pass, which offers spectacular views from its 2,260 metres.

Having crossed through the Atlas Mountains we'll arrive at Aït Benhaddou Kasbah, one of the most impressive fortified cities in Morocco and the emblematic filming location of movies such as Lawrence of Arabia, Gladiator and Kingdom of Heaven.

We'll then take the Route of the Thousand Kasbahs to Skoura. Here, we'll stop to explore Amridil Kasbah before hitting the road to Kelaat M'Gouna, a pretty city in Tinghir Province and capital of the Valley of the Roses. At the end of the first day, we'll drive to the Dadès Gorges, where we'll spend the night.

After breakfast, we'll set off towards the Dadès Valley, travelling through the incredible Todgha Gorges, where we'll have lunch.

With renewed energy, we'll continue on our journey in the direction of Merzouga, passing through the Jorf palm grove, an area known for its excellent dates, and Erfoud, home to intriguing fragments of fossils.

Having arrived in Merzouga, we will swap our 4x4s for camels to immerse ourselves in the desert and make our way to Bedouin camp where we'll spend the night and enjoy a traditional Moroccan dinner.

On the way back to Ouarzazate, we'll take a different route. Passing the Tafilalet Palm Grove and the village of Rissani, ancient capital and home to the founder of the Alaouite Dynasty, we'll reach the town of Alnif. Here, we'll join the road that cuts across the stunning Anti-Atlas mountain range.

After taking in the spectacular colours and shapes of the mountains, we'll arrive at Tizi N'tfarkhin, Tinghir and an amazing palm grove in the Dadès Valley. At lunchtime, we'll stop at Klaat M'Gouna to eat and rest before continuing the route.

In the afternoon, we'll pass over the High Atlas mountains on our way to Ouarzazate, where we'll spend the night in a riad our kasbah.

After a delicious breakfast, you'll have time to explore Ouarzazate at your own pace. We recommend visiting the Taourirt Kasbah and Atlas Film Studios, known as the Hollywood of the desert.

We'll drop you back off in Marrakech in the early afternoon.

Other excursions from Marrakech

If you would like to explore the Moroccan desert, but you're looking for a shorter tour, check out our other excursions: 2 Day Zagora Desert Trip and 3 Day Sahara Desert Tour.

If you'd like, you can do this excursion in a private group of just you and your partner, family or friends booking our Private Desert Trip.

The activity takes place with an escort that speaks in english and other languages.

Pick up from hotel, riad, airport or other meeting point.

Fuel, tolls and all associated costs.

Camel ride to the camp.

I travelled with small children
10

I travelled with friends
Show all the reviews
like -12%

9.10 / 10 1,937 reviews
Immerse yourself in the most surprising part of the Moroccan desert, and contemplate the contrasts offered by its different landscapes
US$ 214.70 US$ 178.90
Book
like

9.30 / 10 952 reviews
Book a private walking tour and explore the Medina of Marrakech, declared World Heritage by UNESCO, accompanied by an exclusive English speaking guide.
US$ 71.50 per group
Book