Discover the beautiful colonial architecture and rich cultural heritage of the historic centre of Salta on this guided tour of the northern Argentine city. 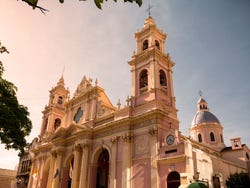 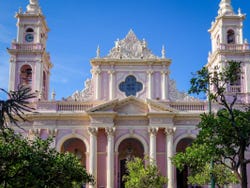 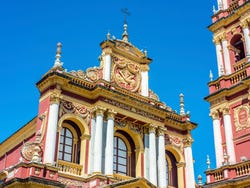 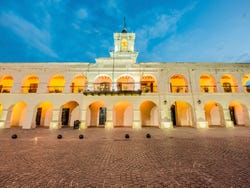 Between 9:30 am and 10 am we'll pick you up from your hotel in the city centre or the meeting point, according to your preference. Our first stop will be Salta Cathedral. Decorated in rose and yellow pastel tones, this is one of the city’s outstanding attractions. We will learn all about the details of its construction, which began after the previous temple was destroyed by a devastating earthquake.

The cathedral is located at Plaza 9 de Julio (9th of July Square), where we will also encounter the Cabildo of Salta. This colonial building of white arches was home to the local authorities for many centuries. It is currently the best-conserved cabildo in Argentina and has been converted into a unique construction. After a gentle 5-minute stroll, we will come to the Church of Saint Francis, the most beautiful building in Salta. The red-toned façade immediately grabs your attention. Its magnificent tower will also amaze you - at almost 180 feet, it is the tallest steeple in South America.

We then continue to the church of San Francisco and convent of San Bernardo where we will delve into the history of Salta, as this is one of the oldest buildings in the city. Then we will climb up San Bernardo hill to enjoy fantastic views across Salta from the summit.

At the foot of the hill, we will find the monument to General Güemes, a legendary caudillo military leader who fought in the Argentinian War of Independence against the Spanish. Then we'll head into the Quebrada de San Lorenzo, a lush forest-covered valley, before visiting Salta's Artisan Market, housed in a wonderful 19th-century building, where you will find local hand-crafted products.

From the market, you'll be taken back to your hotel for around 1:30 pm.

This tour includes pick up from hotels in the centre of Salta. If you're staying elsewhere, we'll pick you up from the following meeting point in Salta: number 45 Calle Buenos Aires.

Transport by bus or minibus, depending on group size.

You can book up until the previous day (7:30 pm) if there are still places available. Book now to guarantee your spot.

US$ 14.30
Free cancellation up to 24 hours before the service starts
Book

8.90 / 10 11 reviews
Visit the incredible Salinas Grandes salt flat on this day trip from Salta and admire a magnificent "white desert" in the middle of the Andean plateau​.
US$ 62
Book
like

10 / 10 2 reviews
Discover the dazzling colours of the northern Argentinian mountains on this day trip to Humahuaca and the Serranía de Hornocal.
US$ 42.80
Book