Discover the fascinating history of San Juan's main colonial fortress on this free tour of the Fort of San Jerónimo del Boquerón! 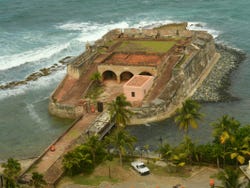 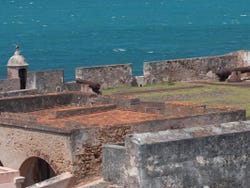 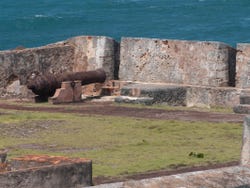 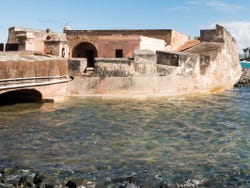 The Puerto Rican island of San Juan still houses vestiges from the colonial era, such as the Fort of San Jerónimo del Boquerón, where we'll meet at 9:30 am ready to learn all about the history of this 18th century fortress.

During this 45-minute guided tour, we'll visit the weapons room, the chapel, the kitchen and the cannon battery-towers, used to defend San Juan from foreign invasion. In the 16th century, English corsairs like Francis Drake and George Clifford tried to attack the island of Puerto Rico and other areas of the Caribbean.

As we explore the fort, we'll discover how it links to other colonial defensive monuments on the island of San Juan, such as the the Escambrón Fort, the Castle of San Cristóbal and the Castle of San Felipe del Morro. What's more, we'll find out about the different projects to restore the San Jerónimo Fort, which was declared a Historic Site in 1983.

The free tour will end at 10:15 am at the main entrance to the fort.

Entry to the San Jerónimo Fort.

Book now to guarantee your spot.

It really takes you back to the times when the fort was occupied, a very pleasant tour, a lot of history and it is appreciated that they take care of the site, very nice experience, 100% recommended. Opinion translated. Show original.

Very well the tour, we received more than expected. In addition to learning about the history of Puerto Rico, Rafa gave us more rivers to get to know the city. Opinion translated. Show original.

9.50 / 10 475 reviews
Explore San Juan and get to know the history of the San Cristóbal Fort, the Las Palmas Bastion, the Totem or El Morro. The best part? It's FREE!
Free!
Book
like

10 / 10 3 reviews
Walk through Puerto Rico's rainforest and discover its unique bays with this El Yunque Forest + Bioluminescent Bays Tour. The magic of nature with a kayak trip.
US$ 154.99
Book
like

8.90 / 10 16 reviews
Climb on board a catamaran to visit Culbrea Island, a beautiful island to the East of Puerto Rico. What's more, you can snorkel and enjoy the marine backdrop of the Caribbean sea.
US$ 165
Book