Explore San Salvador de Jujuy to discover its iconic monuments such as the Government House and the Cathedral on this guided walking tour. 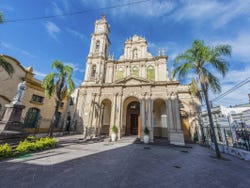 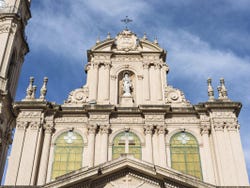 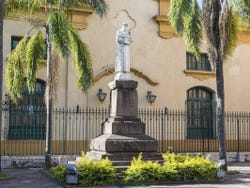 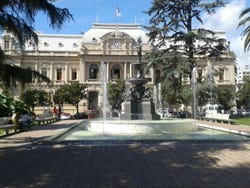 We'll pick you up between 9 am and 9:15 am at the selected meeting point and set off on our guided tour of San Salvador de Jujuy.

We'll start with one of the most important buildings in the city, the San Salvador de Jujuy Cathedral, a colonial architectural masterpiece built in the 17th century. Then, we'll make our way to the Palacio de Gobierno de Jujuy, the Government Palace that houses the first Argentinian flag, bequeathed by General Manuel Belgrano in one of the most important historical moments of Argentina.

Our guided tour will take us past some of the main monuments in the historical centre of San Salvador de Jujuy such as the Lavalle Museum and the Provincial Archaeological Museum.

After this, we'll cross the Rio Grande river and through some of the most characteristic neighbourhoods of the city, including the Ciudad de Nieva, until we reach the Alto La Viña viewpoint. What's more, throughout the tour of Jujuy we'll see each of the six works by the Argentinian sculptor Lola Mora.

The tour will end at 1 pm back at the starting point.

Hotel pick up and drop off (optional).

Transport in bus or minibus.

US$ 24.30
No hidden fees or surcharges
Free cancellation up to 24 hours before the service starts
Book

No rating yet
Discover the natural wonders of  Argentina on this day trip to Purmamarca and Salinas Grandes and visit the Cerro de Siete Colores and the Cuesta de Lipán!
US$ 35.70
Book
like

No rating yet
Discover the colourful landscapes, historic ruins and charming villages of north Argentina on this tour of the Quebrada de Humahuaca from San Salvador de Jujuy.
US$ 32.80
Book
like

No rating yet
Explore the wild mountains around San Salvador de Jujuy and discover the lagoons of Yala on this excursion. Plus visit the relaxing Termas de Reyes hot springs!
US$ 28.50
Book