Discover the most important spots around a city which has experienced many wars, including the First World War and the Balkan War, with this Sarajevo Free Walking Tour. 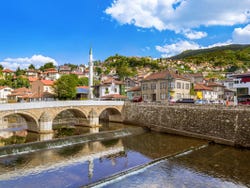 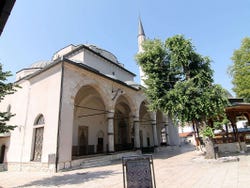 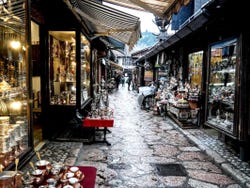 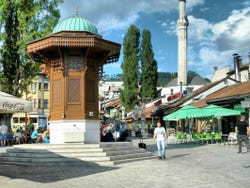 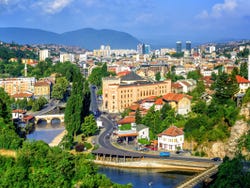 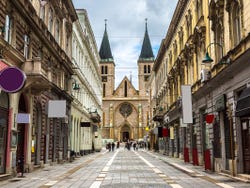 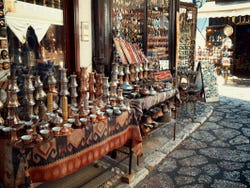 At 10:30 am we'll meet at Gazi Husrev-begova, Sarajevo's jewellery street. From here we'll explore the most important points around the capital of Bosnia and Herzegovina, famous for being the site that triggered the First World War.

We'll pass through the oldest parts of the city, such as Kazandziluk street until we reach Baščaršija, the old bazaar: one of Sarajevo's liveliest areas?

As we continue walking around the city we'll admire its Ottoman and Austro-Hungarian architecture which stands out in some of its most characteristic buildings. One highlight is the City Council previously used as the National Library and the University.

This free tour will also give us an insight into the different religious communities in the capital city, including Jewish, Catholic, Muslim and Orthodox. We'll visit the old Orthodox church, the Gazi Husrev-beg mosque, the grand Clock Tower, the synagogue and the Sacred Heart Cathedral.

Another stop which reflects modernity in Sarajevo is Hotel Europe. Finally, we'll reach the Latin Bridge where Austria's Archduke Franz Ferdinand was assassinated in 1914.

The free tour will finish at the starting point at 12:30 pm.

You can book up until 30 minutes before the activity as long as there are still places. Book now to guarantee your spot.

The walking tour through the city we loved. With no more tourists, my partner and I were able to have the tour to ourselves. An incredible experience, since the guide Edin was very attentive answering our questions and curiosities. There was always time to tell stories related to people from the city, jokes, curiosities ... A 10 :) Opinion translated. Show original.

Mostar and Four Pearls of Herzegovina

9 / 10 10 reviews
Discover five enigmatic locations of Sarajevo in just one day, on this fantastic trip to the Four Pearls of Herzegovina and the fairytale city of Mostar.
US$ 84.80
Book
like

No rating yet
Visit the town that suffered one of the greatest massacres after World War Two with this Srebrenica Day Trip. Discover the important and terrifying history.
US$ 72.70
Book
like

10 / 10 11 reviews
Discover the fascinating history of the captivating city of Sarajevo, when you take this fantastic panoramic tour.
US$ 36.30
Book