Don't miss this unforgettable two day trip to the temples of Angkor. Discover the ancient city's most iconic sights as well as the other jewels of Khmer art, including Angkor Thom and Banteay Srei. 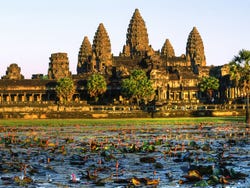 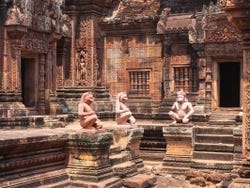 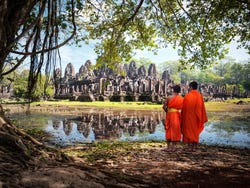 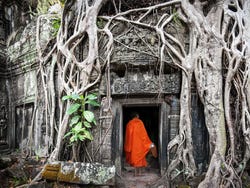 After being picked up from your hotel between 7:45 am and 8 am, we'll set off on our tour of the iconic ruins of Siem Reap, ready to discover the fascinating history of Cambodia's Khmer Empire.

Our private tour will begin entering the south gate of Angkor Thom, the ancient city from which the last Khmer kings ruled, before the country was taken over by the Siamese in the 15th century. Here, explore the Baphuon Temple, a Buddhist sanctuary which was originally dedicated to the Hindu god Shiva, and try and interpret the bas-reliefs of Bayon Temple.

We'll then make our way to Ta Prohm, an ancient Buddhist monastery which has been completely taken over by the jungle. Admire this beautiful fusion of crumbling Khmer architecture with tropical trees, a spectacular sight which was a filming location for the blockbuster movie Tomb Raider. After exploring Ta Prohm, we'll stop for a well-earned lunch break, the perfect escape from the hottest part of the day.

With renewed energy after eating, we'll head to Angkor Wat, the most important temple in Cambodia and the only one to have remained active as a place of worship since its foundation in the 12th century. Strolling through the majestic avenues of the largest religious monument in the world, its exquisite carvings and stunning grounds will leave us in awe.

At the end of the day, you'll be dropped off at your hotel in Siem Reap at around 5 pm, where you can rest in preparation for the second day of your excursion.

At 8 am, we'll pick you up from your hotel and set off for Angkor again, ready for the grand tour of the UNESCO World Heritage Site.

Our tour will take us to explore the Pre Rup Temple. Built in the 10th century and presumed to be a site dedicated to funeral rites, it is considered the only remaining purely Hindu temple in Angkor, the rest having been transformed to Buddhist places of worship in the 12th century.

At 1 pm, we'll stop for a break and you'll have time to get your own lunch at a local restaurant. Then after eating we'll head to Banteay Srei, which translates as the Citadel of Women. The temple was built from red sandstone, which lent itself to the easy carving of intricately detailed reliefs that are still visible to this day. As you stroll between its walls, admire the mythological scenes engraved into the lintels and columns.

The final stop of the day will be at a gallery showcasing photos and information about Banteay Srei before and after its restoration, so you can see the important work that has been done here.

At the end of the tour, we'll take you back to your hotel in Siem Reap. If you'd like, on the way back, you can ask your guide to stop in at the Akira Landmine Museum, the Angkor Butterfly Centre or the Palm Sugar Village to make the most of your time in the area.