This free walking tour of Trinidad will take you round the most important parts of one of the most well-preserved colonial cities in Latin America, for free! 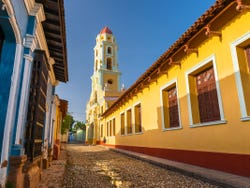 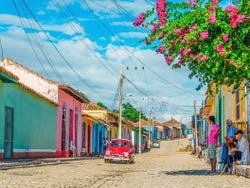 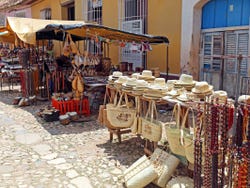 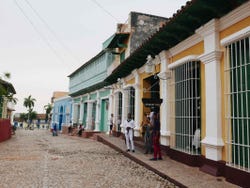 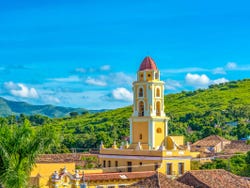 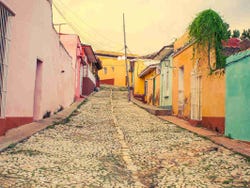 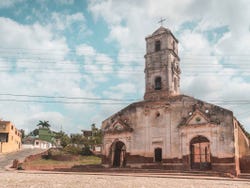 We'll meet at 10 am in front of the Grand Iberostar Trinidad Hotel, located at the heart of this beautiful colonial city. This building is a wonderful example of the town's typical architecture.

Then we will begin a walking tour of Trinidad's cobbled streets. Our first stop will be at the San Francisco de Paula Church, which was a Franciscan place of worship in Cuba's central region during the colonial era.

From there, we'll go to the Brunet Theatre ruins and pass by the Casa de Cultura cultural centre. Did you know that this is one of the locals' favourite places to go salsa dancing? Later, we'll walk down to the Plaza Mayor main square, the town's historical centre. We'll admire the magnificent surrounding buildings and look around the Amelia Peláez art gallery.

Then we'll take you to try the region's most famous drink: la canchara. We'll then continue the free tour, stopping at the San Francisco de Asís Church, built in the 18th and 19th centuries. Its yellow tower is a landmark of the city.

We'll finish the tour at 1 pm in the Plaza de Santa Ana square, where you'll be able to see the ruins of an ancient prison from colonial Trinidad.

This free tour doesn't take bookings for groups of over 6 people.

Minors must be accompanied by an adult, maximum 3 minors per adult.

We won't be paying for any entries, you'll just be given a guided tour from the outside.

Very satisfied with the guided tour of Trinidad. The guide was extremely friendly and very competent culturally in the city. Thank you Opinion translated. Show original.

It was great! Our guide called herself 'la negra' and it was a luxury to do the tour with her. He explained everything about the city, took us to try the canchánchara and we had a fun and enjoyable morning. Opinion translated. Show original.

A very nice tour with Renier. A very nice way to get to know the city. A 10 Opinion translated. Show original.

"La negra" explained everything about Trinidad! We recommend this tour! Thank you Opinion translated. Show original.

No rating yet
Take a fabulous day trip to the glorious Playa Ancon beach in a classic American car. White sand and crystal-clear waters await!
US$ 47.20
Book
like

No rating yet
Immerse yourself in the lush nature of Trinidad, on this horse riding tour of Parque El Cubano. Plus, bathe in an enchanting waterfall in the natural park!
US$ 41.30
Book