This guided tour of Bratislava at night takes you on a journey of the city's most iconic landmarks and their nightly illuminations. Discover the best views of the city from the hilltop castle and the UFO viewpoint. 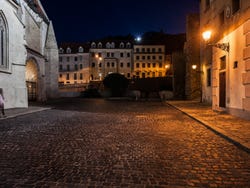 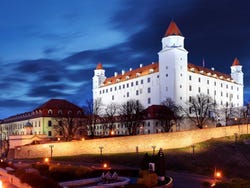 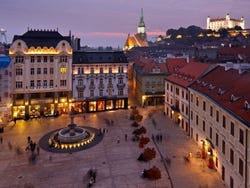 After being picked up from your hotel, your bus tour of the Slovakian capital at nightfall will begin. You'll first head up to the highest part of the city, reaching the imposing Bratislava Castle. Here, you'll make a stop to take photos of the massive fortified building and the incredible views it offers over the historic city. Don't forget your camera!

Your tour will continue through the city centre itself, passing some of Bratislava's most important buildings and monuments. Admire the illuminations of the Grassalkovich Palace, the Rococo-Baroque residence of the Slovakian President; the Slovak National Theatre, the Main Square and the iconic Most SNP, named for the Slovak National Uprising and also referred to as New Bridge, despite having been built in the late 1960s.

The next stop on your tour will be at the UFO tower (entrance fee not included). This modern structure is located on one end of the New Bridge and is home to a 311 foot (95 m) high observation deck. From this vantage point, visitors can enjoy unforgettable views of the city and Bratislava Castle.

The final part of your tour will explore the city's historic centre so you can see its landmarks up close. You'll then be given the choice between being returned back to your hotel, or being dropped off in the Old Town where you can continue enjoying Bratislava's lively nightlife at your own pace.

The activity takes place with a guide that speaks en english.

US$ 41.10
Free cancellation up to 48 hours before the service starts
Book

8.90 / 10 55 reviews
Explore the unmissable sights of the Slovak capital aboard a historic vehicle. Enjoy tradition and history in comfort on this tour of Bratislava by train.
US$ 14.10
Book
like

No rating yet
Feel the adrenaline of cruising the second largest river in Europe at top speeds! Enjoy stunning views of Bratislava as you navigate the Danube on a speedboat.
US$ 282.50 per group
Book
like

9.70 / 10 18 reviews
Leave the bustle of Bratislava and explore one of the Roman Empire's most famous wine-growing regions, discovering royal cities and Cerveny Kamen Castle.
US$ 91.80
Book