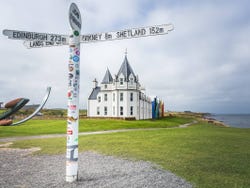 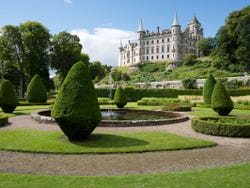 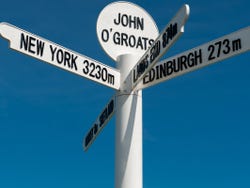 On the morning of your tour, you'll meet your driver-guide at Inverness Bus Station, where you'll board your bus ready for your excursion to the northernmost town in Great Britain: John o' Groats.

Driving north, the first stop on your adventure will be Loch Fleet, a sea loch and nature reserve on the east coast of Scotland which is home to a large number of birds and even seals! From Loch Fleet, you'll head to the nearby village of Golspie, where you'll make a stop to stretch your legs while you take in the views of the tranquil North Sea beaches.

Just outside of Golspie, you'll stop at Dunrobin Castle (entrance not included), a stately home in Scottish Baronial and French Renaissance architectural styles and the family seat of the Sutherland Clan. You'll have the opportunity to visit the castle and explore its elegant rooms, beautiful French-style gardens and fascinating ethnographical and archaeological museum.

Continuing on your route to the far north of Scotland, you'll reach Wick, one of the oldest Viking settlements in the United Kingdom. There will be free time here for you to explore the historic centre of Wick at your own pace and to indulge in a delicious typical lunch (not included) while you relax and enjoy the views of Wick Bay.

After eating, you'll drive for another half an hour, arriving at John o' Groats, famous for being the northernmost town on the island of Britain. Stroll along the seafront cliff, enjoying the incredible panoramic views over the dramatic landscapes of the Scottish Highlands. If you're lucky, you might even spot Atlantic puffins, grey seals and maybe even orcas, all of which inhabit the coastal region around John o' Groats.

Having made the most of your time in John o' Groats, you'll take the road back to Inverness. On your journey back, which takes around three hours, you'll make brief stops in two especially photogenic spots: Dunbeath port and Brora, where you can take some last photos of the beautiful Scottish countryside.

You'll arrive back at Inverness bus station at around 7:30 pm, where your excursion will come to an end.

* The price varies based on the chosen date

The capacity of all means of transport will be reduced to 50% of their maximum capacity.

You can book up until the previous day (6:00 pm) if there are still places available. Book now to guarantee your spot.

From
US$ 67.60
Free cancellation up to 24 hours before the service starts
Book

No rating yet
Discover traditional villages and Scottish landscapes with this Highlands and Harry Potter Train Experience. Keep an eye out for the Loch Ness monster!
US$ 122.90
Book
like

Loch Ness and the Highlands Trip

10 / 10 3 reviews
Discover some of the most spectacular scenery of Scotland when you take this trip to Loch Ness and the Highlands from Inverness.
US$ 51.10
Book
like

No rating yet
Discover the spirit of the Highlands on Scotland's legendary malt whisky trail and tour Speyside's most traditional distilleries, castles and even a cooperage.
US$ 56.60
Book