Get ready to explore Malaga on two wheels on this Segway tour. Don't miss out on the excitement of whizzing through the historical centre and Mount Gibralfaro! 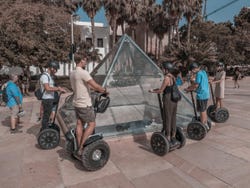 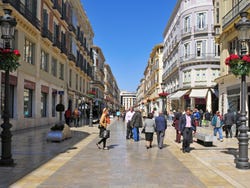 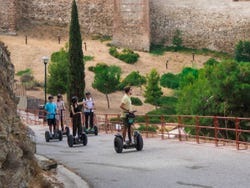 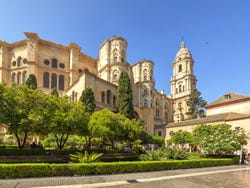 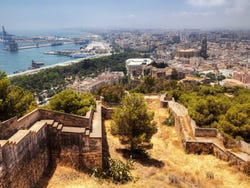 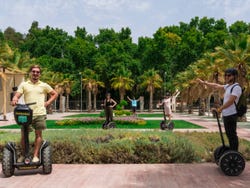 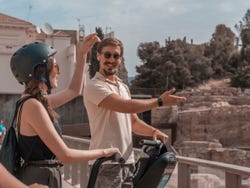 The tour starts at Calle Ángel Ganivet 1, just a few minutes away from the Malaga Cathedral. Before we get going we'll give you some brief instructions about how to drive the Segway. You'll be surprised at how simple and intuitive it is to use.

This Segway tour of Malaga is the ideal way to explore the Spanish city. We'll delve into its beautiful streets as our guide shows us the main places of interest in the historic centre and reveals fascinating facts about its history.

When making your reservation, you'll have the choice of duration for your tour to suit your preferences:

This panoramic route around Malaga first takes you to the famous Calle Larios, the liveliest street in the city. It continues through the Plaza de la Constitución, delving into Malaga's most historic streets, and reaching Plaza de Uncibay.

We'll head to the Alcazaba, where we'll learn about the history of Malacca, as the city was known in Roman Hispania. This palatial fortress from the Muslim era located at the foot of Mount Gibralfaro will remind you of the iconic Alhambra in Granada. On our Segways, we'll climb up to the Gibralfaro Castle to enjoy the panoramic views of Malaga and its port.

On the way back, we'll continue to discover the city's Roman legacy visiting the Roman Theatre. We'll then go to Plaza de la Merced, where we'll see the monument to Torrijos, before getting to know the history of the most famous "Malagueño" at the Pablo Picasso Birthplace Museum. After an hour exploring Malaga, the segway tour will end back at the original departure point.

The two-hour Segway tour will take you to see Malaga's most important monuments and landmarks. We'll begin by riding through Malaga Park, an impressive Mediterranean garden home to lush tropical and subtropical plants. From there, we'll head into the Palmeral de las Sorpresas, or the "Palm Grove of Surprises" which will bring us to Malaga's contemporary port area.

We'll then make our way to the city's Cathedral, where we'll discover why it is affectionately known as "La Manquita", or the "One-armed Lady" by the locals. Not far from the church, we'll reach the Picasso Birthplace Museum, and the guide will tell us all about this famous Malaga-born artist.

Our next stop will be at the top of Mount Gibralfaro, where the views will be worth the climb: we'll admire the spectacular panoramic over Malaga and its coastline. We'll also hear all about the city's history as we take in the Muslim era Alcazaba and the Roman theatre.

The return route will take us through Plaza de la Merced and alongside La Malagueta Beach, before the tour comes to an end back at the original meeting point after two hours.

This comprehensive three-hour tour will allow you to discover all of the must-see places in Malaga from the comfort of a Segway. To begin with, we'll immerse ourselves in local life riding down the famous main street known as Calle Larios, before approaching Malaga Cathedral to admire its gothic architecture and reveal the story behind its nickname.

We'll travel through time to learn all about the Roman and Muslim legacy found around every corner of Malaga: the Alcazaba, the Gibralfaro Castle and the Roman Theatre are just three examples of the historical and cultural heritage of the city. After enjoying unbeatable views of Malaga from the top of Mount Gibralfaro, we will visit the La Malagueta bullring and go to the beach of the same name.

On our Segways, we'll then cruise through the Malaga Park, taking in the peaceful atmosphere of this beautiful garden that has become the heart of the city. At the end of the three-hour tour, we'll return to our initial meeting point.

Who can participate in this activity?

You can book up until 36 hours before the activity as long as there are still places. Book now to guarantee your spot.

9.60 / 10 430 reviews
Learn about Malaga's fascinating heritage as you visit the Moorish Alcazaba and the Roman Theatre, originally built in the 1st century BC.
US$ 38.60
Book
like

9.40 / 10 44 reviews
Be spellbound by the magical sunset of Malaga leave when you take this fantastic evening catamaran ride.
US$ 18.10
Book
like

6.90 / 10 7 reviews
Malaga is synonymous with fried fish, salmorejo and sweet wine. There are so many gastronomical treats for you to try; are you hungry?
US$ 14.50
Book