Discover the secrets of Surakarta exploring its palaces and traditional markets, before visiting the mystical ancient temples of Cetho and Sukuh perched high on the slopes of a volcano. 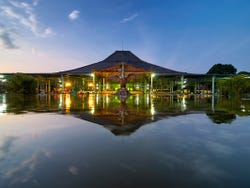 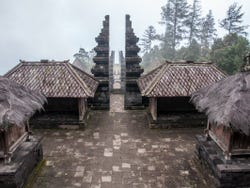 After being picked up from your hotel, you'll be driven to the city of Surakarta, around two hours away from Yogyakarta. You'll visit the Radya Pustaka Museum, a popular cultural attraction and the second oldest museum in Indonesia. Don't miss the impressive collection of 'Wayang' puppets used in traditional Indonesian shadow puppet theatre. Admire the different typical handicrafts created in the area during your next stop at one of the markets: Solo, as the city is also known, is the best place to buy stunning Batik textiles.

Visit the nearby Mangkunegaran Palace, one of Surakarta's architectural gems and the best-preserved royal palace in the city. Built in 1757, it is still home to the descendants of Java's royal family.

Having enjoyed a full day of culture and history, you'll be dropped off back in Yogyakarta.

Please bear in mind that the price of this tour does not include entrance fees to the monuments visited. You must pay these in cash when you arrive at the monuments.

Per group from
US$ 106.20
Free cancellation up to 48 hours before the service starts
Book

I travelled with small children
Show all the reviews
like

9.20 / 10 51 reviews
Enjoy a fascinating tour of the city of Yogyakarta, home to the beautiful Sultan Palace and its Water Castle. You'll also visit two of Indonesia's most impressive temples.
US$ 90.90 per group
Book
like

No rating yet
Have a unique adventure cave tubing in enchanting Pindul Cave..
US$ 141.60 per group
Book
like

10 / 10 3 reviews
Watch a breath-taking sunrise over the Borobudur Temple, considered one of the wonders of the world, and explore the volcanic area of the Dieng Plateau.
US$ 113.30 per group
Book