Explore the national park home to around 150 ancient rock-hewn caves churches on this private guided tour of Murgia Park in Matera, the European Capital of Culture for 2019. 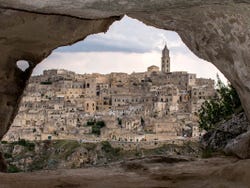 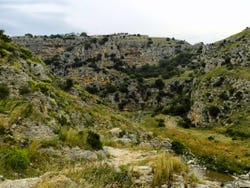 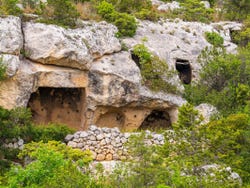 Meet your guide in Via Alessando Volta, in the heart of Matera, ready to head out into the national park known as the Murgia Materana, or the Park of Rock Churches.

Entering the UNESCO World Heritage Site, you'll first head to the archaeological remains of a Neolithic town, where you'll learn all about the daily life of the historic inhabitants of the region, who were mainly shepherds and hunters. Discover the ruins of farms, sheep pens knowns as "jazzo", water tanks and wells that have survived over thousands of years.

You'll then find yourself surrounded by some of the 150 Rupestrian, or rock-hewn, churches for which the Murgia Materana Park is known. Mainly built in the Middle Ages, these sanctuaries are an important representation of the significance of religion in this area of southern Italy throughout history.

First, you'll visit the Church of San Falcione, one of the oldest cave churches in Matera. This Rupestrian temple stands out for having been carved entirely out of the rock, and for the 9th century frescoes that still decorate its interior.

Next, you'll explore the Church of Madonna delle Tre Porte, where your expert English-speaking guide will reveal why its walls have such important historic value.

Your private walking tour of the Matera Murgia Rupestrian Churches Park will come to an end at the viewpoint used by Mel Gibson to film the crucifixion scene in The Passion of the Christ, as this area of Italy has been said to resemble Jerusalem. Enjoy the opportunity to take a panoramic photo of the spectacular view of Matera's historic centre before returning to the city by bus after your fascinating tour.

How long is the walking tour?

During the excursion, you'll complete a route of around 4 kilometres (about 2.5 miles - around a 50 minute walk). The guide will tailor the speed to the needs of your group so you can make the most of the activity.

Due to the rehabilitation work on the rock churches, visits to the churches mentioned in the itinerary will be suspended until further notice. Instead, you'll enter the church of Santa Maria della Palomba, a fascinating16th century sanctuary.

Transport between the centre of Matera and Murgia Materana.

Private and exclusive tour, there will be no one else in your group.

You can book up until 5 days before the activity as long as there are still places. Book now to guarantee your spot.

Per group from
US$ 284.80
Free cancellation up to 3 days before
Book

10 / 10 3 reviews
Fall in love with the stunning centre of Matera - a picturesque city in Basilicata known for its famous churches and rock-cut houses known as Sassi!
US$ 29.60
Book
like

9.70 / 10 13 reviews
Discover the ancient cave dwellings and rock churches of Matera, the European Capital of Culture for 2019, on this fascinating guided tour.
US$ 142.40 per group
Book